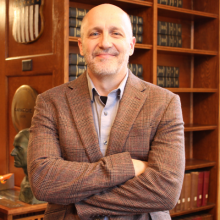 Experimental petrologist Michael Walter became director of the Geophysical Laboratory beginning April 1, 2018. His recent research has focused on the period early in Earth’s history, shortly after the planet accreted from the cloud of gas and dust surrounding our young Sun, when the mantle and the core first separated into distinct layers. Current topics of investigation also include the structure and properties of various compounds under the extreme pressures and temperatures found deep inside the planet, and information about the pressure, temperature, and chemical conditions of the mantle that can be gleaned from mineral impurities preserved inside diamonds.